The pros & cons of a dogma

Last week Italian social media was boiling with rage. A sacred dogma had been violated. A recipe for a one-pot carbonara appeared on a French website, complete with a video showing bow tie pasta (shock and horror, they even replaced the spaghetti) being simmered with pancetta and onions. This Gallic version of ‘carbó’, even called for creme fraiche to be added at the end, together with a rather mean sprinkling of Parmesan.

For Italians, this was tantamount to an offence to their national pride. Millions of my countrymen viewed the clip, leaving thousands of comments ranging from the mocking to the outraged. With calls such as “You already have the Mona Lisa, leave the carbonara alone”, even the Italian prime minister was asked to dive into the debate. But why all this fuss for just a recipe? 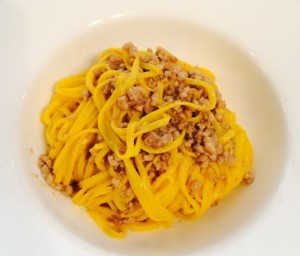 Tagliatelle with white meat ragout. One of the stalwarts of Piedmontese cuisine

Because you need to understand that we Italians, despite being renowned for our creativity and knack for invention in  many a field from design to engineering, when it comes to food we are staunchly dogmatic. Even something as simple as a pasta with courgette has a recipe that shouldn’t be messed with. Having been living abroad for almost half of my life, I am ambivalent towards this. While on the one hand I think a one-pot carbonara is just a ill thought ‘porcheria’, I am also convinced that recipes should be constantly evolving. Availability of certain ingredients, tastes, trends and influences: all these things change and they should be reflected in the way we cook.

My rule generally is: if it’s simple and it works, don’t change it. The Holy Trinity of soffritto  – onion, carrot and celery – will always be preserved. But for slightly more complex dishes, I like to add, substitute and exchange ingredients, often intrigued by the result.

This aversion to change is, I think, a symptom of our Italian society: our cuisine is dogmatic as much as we Italians refuse to evolve. Living abroad and away from the granitic obstacles my home country keeps on placing on its path to progress, I can see how this is hindering our growth as a society.

We refuse to acknowledge what’s happening beyond our borders and we deny our fate, much in the same way we wouldn’t accept cumin as a spice to add to lasagne, or dried porcini in a pasta e fagioli. Anything that is different, or even worse, foreign, is to be despised. The Italian way, the old recipe, is always best.
I am not sure when exactly we became this rigid. I really don’t think that peasants two centuries ago would have been so particular about how to cook their trippa or finanziera. They just got on with it, and many of our best recipes came from the need to make something good out of very little.

I think that instead of being so hung up on the technical minutiae of a recipe, Italians should spend more of their efforts in showing other countries why their dishes work so well, shining a light on those subtle alchemies of taste that turn a simple dish into an epic one.
If we had done this, the French would have never come up with bow ties and creme fraiche in a carbonara. Why? Because as every Italian knows, all the magic of this dish is in how the fresh egg hugs and curdles on the long strands of pasta. And this is always the case, even if you enjoy a final shave of allspice more than the traditional black pepper.