How Bompas & Parr imagined a British Museum of Food 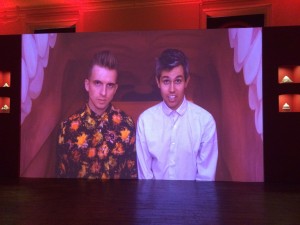 They set a steamship in 55,000 litres of lime jelly, cooked a barbecue on lava and sent a bag of coffee beans to space and back. But for me Bompas & Parr will forever be the pair that got a few thousands people, me included, pummelled and squeezed rather hard by a full-body and quite menacing-looking version of a massage chair. This slightly perverse experience, accompanied by a film illustrating the journey of a morsel of food through the digestive tract (hence all the body pounding and kneading) was the first exhibit in their British Museum Of Food, which on Saturday 23rd January will close its doors after three months in its temporary home in the heart of Borough Food Market. 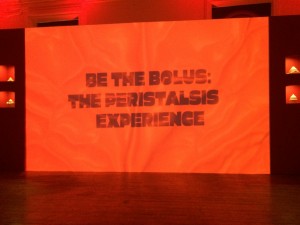 As far as museum introductions go, the ‘Be the Bolus’ room was quite an intense (and at times painful) one: once the contraption started tickling my feet, my attention was gone. All I could do was focus on the images of the inside of the human body and, lost in a thousand body sensations, I missed most of the accompanying story, apart from some fleeting details about the role of hydrochloric acid. 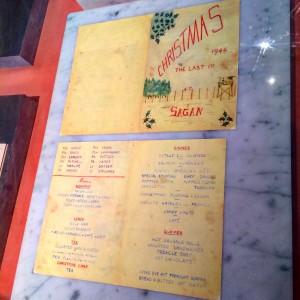 Most impressive and, like most exhibits in the museum, still in the process of being expanded, is a room upstairs full of old British menus. Apart from giving an insight into how tastes and conventions around the table changed through the centuries, they paint a sometimes poignant image of history.  There’s a 1944 handwritten Christmas menu from British POWs in Stalag Luft III, the same Nazi prison camp that inspired the film The Great Escape. It was comforting to see that at least for Christmas they seemed to be doing ok for food, but their writing ‘the last Christmas (?)’ on the menu’s front cover doesn’t leave space to doubt their unending hope for liberation.

Another room invited people to take part in an interesting experiment: four booths each with a different soundscape and four seemingly identical bowls of chocolate buttons. The participants are asked to rate the chocolate in each booth according to bitterness, sweetness and creaminess, and then vote for their favourite. I came across a similar experiment in the Food Sensorium area of the Food Matters Live exhibition. Some scientists at Oxford University must be studying how different senses have an impact on our tastes, how our perception of sweetness, for example, may change if accompanied by certain sounds or colours. There is definitely some truth there, because although I’m pretty sure the chocolate was the same, the way it tasted was actually slightly different from booth to booth. 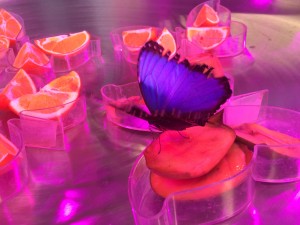 And then there’s more: a room full of giant tropical butterflies and plenty of food-inspired works of art.
But this is only the museum in its embryonic stage: Bompas & Parr hope to raise funds, expand the collection and find a permanent home for it in the near future. The start is promising. With their trademark taste for the quirky and provocative, they manage to explore food through the lense of biology, human perception, culture, environment and art and in doing so they prove that food is not just what we eat and what fuels us. It occupies centre stage in the fabric of life.

Catch this if you can.