Fat tales from the top…The Kitchen Table at Bubbledogs

The other night I had a culinary experience to remember. It was one of the richest meals I had in ages, a truly epicurean feast which has been followed by many a green juice and a strict general detox.

But when I fall, I fall graciously. This was a 12 course tasting meal in a unique Michelin starred restaurant: 19 seats arranged around a super clean and functionalkitchen, from where you can see everything that’s being prepared for you and interact with the chef James Knappett and his team. A sort of secret chef’s table in a speakeasy for food lovers, the appropriately named The Kitchen Table is tucked away at the back of the Bubbledogs bar in Fitzrovia, where they serve some of the best hotdogs in town.

Opened in 2012, it always stuck to the same formula: while you can choose what to drink or whether to go for the wine pairing option (that was my choice, although I swear I never finished a whole glass!) you don’t get to choose what food is being served to you and the menu reads like a minimal list of key ingredients. The one for 17th March started with four items:
Parkerhouse
Potato
Chicken
Scallop

The first dish was a warm bread roll (the parkerhouse) served with whipped pork fat, slightly smoky from the bacon in it and garnished with honey and bee pollen arrived fresh that day from a French vineyard. Apart from the artery busting properties of such a dish, it
was a gorgeous affair, the fat fluffy like cream cheese just melting on the warm roll, the honey adding a much needed aromatic note to the heaviness of the pork. Slightly disappointing because in my opinion it lacked the structure to match such a rich starter, was the first wine in the pairing, a Muscadet Sevre et Maine (2013 Domaine de l’Ecu, Gneiss) which did slightly better when drunk with the second dish, the potato. This was like a posh dehydrated crisp, topped with smoked salmon dices and chives, very pleasant and leaving you wanting for more. 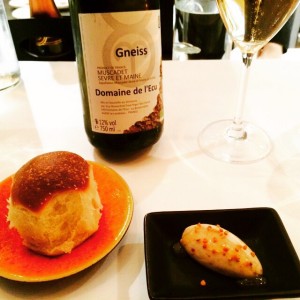 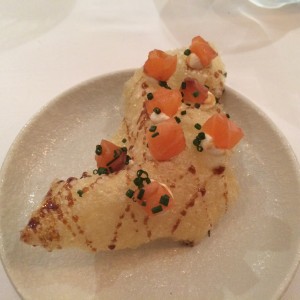 The chicken was another cholesterol lover’s dream, dried chicken skin topped with herb mascarpone and bacon jam (yes, a smokey and sweet pork based spread, for as much as it sounds wrong it was heavenly!).
The scallop was raw, topped with dry grated scallop roe (which at first I mistook for saffron strands) and placed next to a keffir lime foam. It was sweet and tangy, with some Maldon salt flakes balancing the flavours out and adding the mineral element needed to match a wonderful Riesling (2012 Weingut Bründlmayer, Kamptaler Terrassen, Kamptal) served to accompany both the chicken and the scallop. 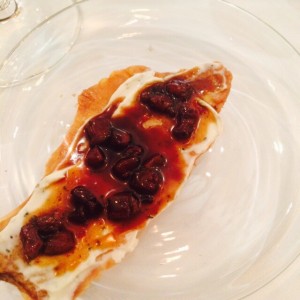 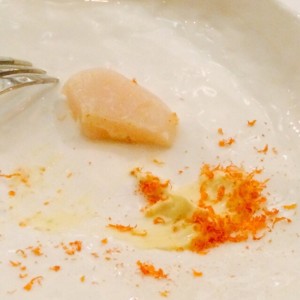 For the mackerel the blowtorch came out to braise the skin and cook the thin fish fillets right in front of the diners eyes. It was served with Japanese turnips and marinated greens and paired with a gorgeous oaky Chardonnay from Santa Barbara, California (2013 Sandhi).
Next dish was an ode to spring and black truffle: generous shavings of Perigord black on top of a bed of fresh wild garlic leaves, lightly pickled onions and roast chicken sauce. It was a perfect, magical pairing, the wild garlic mild enough not to obscure the delicacy of the truffle. This was served with the first red wine of the night, a 2010 Chianti Classico (Monte Bernardi Riserva).

The beef was a masterpiece, a juicy bite of sirloin from Devon, it left me wanting for more even though by then I was certainly not starving. It went well with a slightly more complex Côte de Rhone Villages (2010 Bertrand Stehelin) which was also paired with the reglis, a genius matching of blue cheese with a rhubarb coulis. 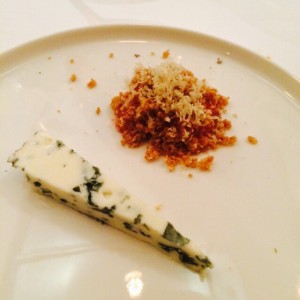 The desserts were also stunning. A simply gorgeous caramel ice cream trio was followed by an extremely interesting pairing of a dark chocolate truffle with a licorice cream filling and a vanilla fudge on the side. 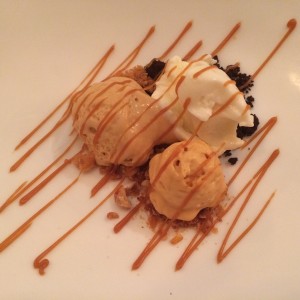 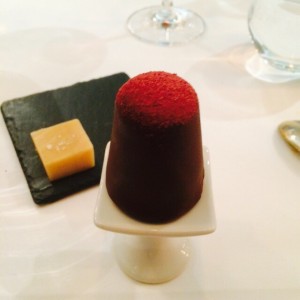 I had to push aside any thoughts of the sugar raising inflammation and forming plaques in my coronaries, while the cholesterol from the earlier artery busting pork fat and chicken was already starting clogging my arteries….oh well, you only live once and I will make amends later, I told myself while sipping the last wine of the tasting, a sweet and fresh offering from the Loire (2012 Domaine Vincent Ogereau, ‘Saint Lambert’, Coteaux du Layon),

Asking questions and generally being nosey is even encouraged, so at the end of the meal I spent some time chatting with chef James, who opened this restaurant nearly three years ago after working as head chef for Marcus Wareing at The Berkley, another establishment with a chef’s table.
A man of real passion, he was telling me and other fellow diners how they never throw away anything, how the menu changes daily and each component of a dish is either fresh or drawn from recipes cooked on previous nights. This is an innovative gripping concept and it helps that James and his team are as approachable and simple as they are. An open kitchen set up like this could easily fail to involve diners to such an extent, and here it is done in an unobstrusive way, the waiters and maitre gently telling you what you’re eating and then leaving the convivial atmosphere work out the rest of the magic on the people gathered around kitchen table. And the food did definitely do the talk.

Tasting menu is £88 plus the wine.