For ice cream’s sake, get me the real thing 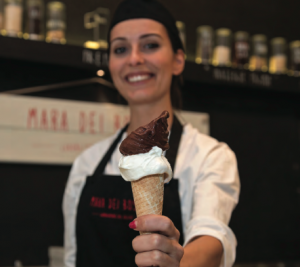 We all love ice cream and there is nothing better then a scoop of that creamy wonder on a hot summer’s day. But, for good ice cream’s sake, I will now spoil your joy a little by revealing  that what you ate so far it’s probably not the real thing. You will find out:

Coming from Italy I see how in recent years many ice cream parlours have had a ingenious makeover: pictures of happy cows, flavours with reassuring names such as “old style cream” and “traditional torrone”  all aim to convey the idea the ice cream you are buying is as artisanal and genuine as you can get.
Unfortunately in 65% of cases the real story is more one of clever marketing and not of real ice cream. Many so called artisan Italian parlour chains such as From, however successful even internationally, use pre made mixes sent by their headquarters to all their franchises. Emulsifiers, stabilisers and cut price ingredients such as the synthetic vanillin instead of real vanilla beans are at the order of the day, even in the most popular operations such as La Romana.
So where to get the real thing? In London I love Gelatorino and Gelupo, the first in Covent Garden and the second in Piccadilly. Clues that their stuff is properly made are:

Despairing because you can’t find decent gelato around where you live? Why not check out Blu Top’s ice cream making classes? Richard Makin makes and sells his own delicious ice cream sandwiches out of a van in London and holds eye opening classes on how to make the best ice cream…it’s slightly different from Italian style gelato, but tasty all the same.

Travelling to Italy and want the sample the best? Check out my city by city shortlist, starting from my beloved hometown.
Happy summer and…happy slurping!

Health score….well, if it’s as rare as the British sunshine, see it as a treat 🙂