A risotto with wood fired umami & a fennel salad to match 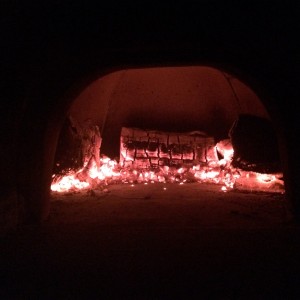 At the weekend we lighted up the wood fired oven and had a roast. The weather was grim and we needed some comforting foods, so we slow roasted a chicken in a pot with onion, celery, carrot and a splash of white wine. We also had some  potatoes, parsnip and beetroot on the side, wonderfully smokey from the oven fire. It was a delicious, rich meal and the next day I felt full till 3pm, after having just my usual hot water and lemon at breakfast. 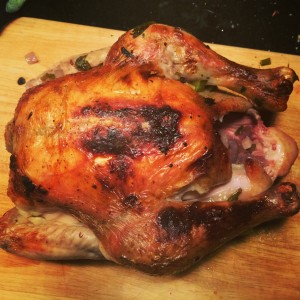 The interesting twist came with what I made with the leftovers. In the chicken cooking pot we were left with a lot of celery, carrot and onion, which we blended until we obtained a rich creamy juice that looked more like a soup, full of umami flavours. We didn’t reduce it as you would do with a gravy, instead using some of it to garnish our roast and reserving the rest. 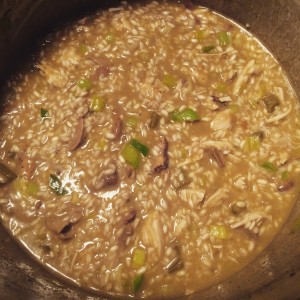 On Monday night I had a few friends over for dinner, and I decided to use that cooking ‘soup’ to make a risotto. I softened a few dried porcini mushrooms and used about half of the leftover chicken breast, added a leek and…voilà, one of the best risottos I ever made.
I also had a lot of celery left and a fennel bulb, so I coarsely chopped them to make a refreshing salad with parmesan, toasted walnuts and lemon juice. 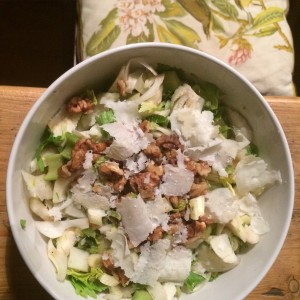 Oh, and for starters I fried some chestnut mushrooms and dried porcini, added white sherry then a touch of cream. I was waiting to do this since reading a Diana Henry article about toast: I toasted some sourdough left over from Sunday, spread unsalted butter, topped with salt flakes and spooned the mushroom mix over. A simple bite of heaven! 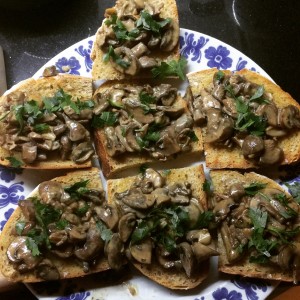 So here are the recipes. In the risotto recipe, you can use just chicken stock instead of the tasty cooking juice we found ourselves with. Add a splash of tamari soy sauce towards the end of the cooking, plenty of parmesan and you’ll have an almost as good umami substitute. 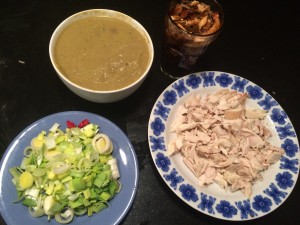 Place the dry mushrooms in a small bowl and just about cover them in boiling water. Leave them there for 20 minutes, then lift them out, chop them coarsely and reserve the water.

Melt the butter in a large saucepan or wok, add the chestnut mushrooms and a pinch of sea salt and cook them on high heat stirring continuously until quite a lot of their moisture has come out. Add the porcini, stir well, cook for a couple more minutes then add the sherry. Cook until it’s evaporated, add about half the porcini water, and when this is evaporated too, stir in the cream.

Prepare your toast pieces, butter them and scatter a few seal salt flakes on them, before spooning over your mushroom mixture and serving with fresh parsley leaves over.

In a large deep saucepan, melt your knob of butter and fry the leek, adding salt to draw out its moisture, until soft. Mix in the risotto rice, coating with the butter and leeks and frying it for 1 or 2 minutes. Add the white wine and cook on medium heat until it’s evaporated. Little by little, add the chicken ‘soup’ or stock, stirring continuously so the risotto doesn’t stick to the bottom of the pan. In about 20 minutes it should be cooked. At that stage, add the tamari sauce if you decide to do so, the butter and the Parmesan. Stir and leave to rest for a couple of minutes before serving with more fresh Parmesan on each plate.

Mix together the fennel and celery and add the walnuts and Parmesan. Garnish with sea salt flakes, fresh lemon juice and olive oil and serve.