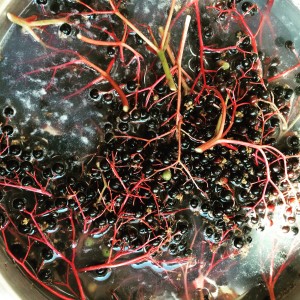 Elderberries are naturally rich in Vitamin C and their syrup works like magic against colds, coughs and flu.  After trying it with clove and ginger against a particularly persistent virus a few months ago, I was determined to prepare my own stash for the incoming autumn. I went out early this Saturday morning, and under an increasingly warm sun I picked a whole bag of berries from trees in my local park and surrounding streets. I soaked them in  water and bicarbonate for a few hours, and made both a jam and a syrup. The latter is already steaming in my cup on Monday, as the weather took a quick turn for the worse and I’m sitting at my computer, rain battering the conservatory and cat sleeping contentedly at my side.

In my native Piedmont we tend to use more the fresh and aromatic elderflowers as opposed to the berries. They are used to make a refreshing summer drink or deliciously combined with floral Moscato wine in a jelly that perfectly complements a variety of local cheeses. To see the berries used in any type of cooking one needs to look further east, to Trentino or Friuli, where in the mountains elderberries are traditionally used as a therapeutic. In Trentino, the syrup is called dùlzen and is made by adding a glass of local white wine every litre of elderberry juice, then cooking the mixture with 500grams of sugar for 30 minutes.

Determined to unite almost all the cold-busting ingredients known to man in one syrup, I made it slightly differently, by boiling the berries in water and two glasses of wine together with sugar, fresh and powdered ginger and a handful of cloves. I then added honey before bottling. A homeopath friend of mine suggested I use this syrup to make water kefir: probably we are getting to the ultimate natural solution against colds. Watch this space.

As for the jam, I only made a small trial batch but want to make more. This time I added a few blackberries and vanilla. 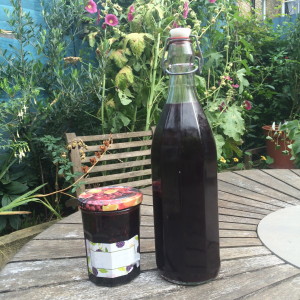 Here are the recipes:

Boil all the ingredients except the honey in a large saucepan on medium heat for 30 minutes.
Sterilise the bottles by boiling them in water for about 20 minutes.
Remove syrup mixture from heat and pour through a strainer into another large sauce pan where you will add the honey.
Mix well then then bottle.

Simmer the berries, vanilla and lemon juice on low heat for about 20 minutes, skimming off any scum that forms on top.
Sterilise your jar by boiling it for 20 minutes.
Mix in the sugar and cook for a further 10 minutes approximately until the sugar is all melted and the jam starts to set.
Spoon into the jar and let cool.

Health score: 6, have in moderation 🙂 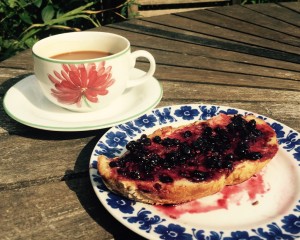