Flavours of home in a vinegar marinade 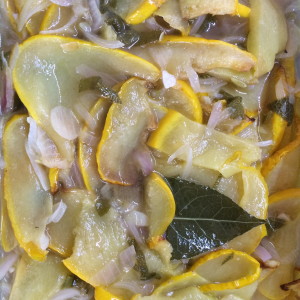 These last few days I’ve been enjoying my home a lot. The rainy weather was in tune with my body, ready to say farewell to a long summer (I spent much of the spring in warmer coutries), while my foot is slowly recovering from its fracture allowing me to get back in the kitchen quite a bit.

A phone conversation with my mother, during which we talked about how massive my sage plant was growing in my garden while hers had been killed by the scorching Italian heat, brought back to mind the memory of “carpione” , a traditional Piedmontese way of preserving fish, meat and vegetables by soaking them overnight in vinegar, wine and quite a lot of sage.
Before 1700, sweet-and-sour elements were very common in Piedmontese cuisine. Meats cooked with vinegar, sugar, honey and all types of spices were considered a luxury. The last three ingredients were very expensive, so consuming foods that contained them was a sign of affluence on the part of the host.
Vinegar was used not only as a preservative, but also as a cover for less appetizing flavours found in some foods. Up until the ‘60s (my mum still remembers eating them as a child) it was common to eat eels and other freshwater fish caught in small canals in the countryside. These fish called ‘tinca’ or ‘carpa’ , had a strong muddy flavour, which was successfully masked by marinading them in vinegar and herbs. ‘Carpione’, this style of cooking, gets its name from the ‘carpa’ fish, and it’s now also used to preserve several types of vegetables and meats.
It is always consumed cold and is especially popular in summer, with vegetables such as courgettes lending themselves particularly well to this cooking method. Breaded veal escalopes are also often put together with courgettes, with lots of sage leaves and some bay lending depth and aroma to the vinegar and wine.

This time I tried the method with summer pattipan squash instead of courgettes, and having the escalopes cooked in this way for the first time in ages was an absolute joy. 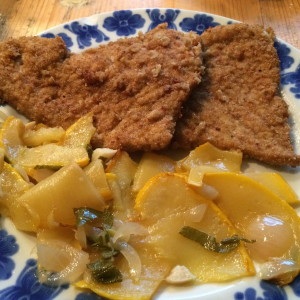 Heat 3 tbsp of oil in a large frying pan, add the vegetables and a little salt and let them sweat their own juices while they cook, covered, on medium to low heat until soft.

Melt 1 tsp of coconut oil in a small saucepan and fry the shallots or onion. When soft add the vinegar, wine, herbs and garlic. Bring to boil and cook for about 5 minutes, then set aside.

Line a serving tray with the vegetables and cover with the marinade.

Coat the escalopes with egg and then with breadcrumbs. Heat the remaining oil in a large frying pan and fry them on medium heat for about 3 minutes on each side.

Place the escalopes in the tray and cover with the vegetables mix.

You can also cook the escalopes separately just before serving. The sharp acidity of the vegetables will pair perfectly with the lushly fried veal.