Escape the bollito in the room of surprises 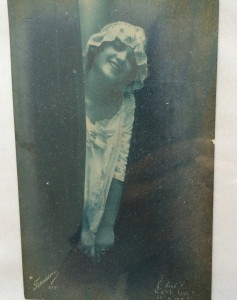 I am saving them jealously. Old copies of the National Geographic magazine from 1899 and 1900, found when I was around 12 years old while rummaging in what used to be my favourite room in our big family country home. A dusty windowless store room, with old wooden cabinets packed full of books, letters and postcards written in neat handwriting. I guess my father, aunts and uncle never felt ready to get rid of these relics from their elders, so everything survived locked in this room, dust gathering through the years.
It was my favourite hiding place when we had big lunches and functions. People used to sit around interminably long tables for infinite amount of times enjoying typical Piedmontese fair such as bagna cauda, ravioli del plin or bollito misto, cooked in the big communal kitchen by the cook of a local restaurant. Although I was never one of those restless kids who can’t sit at the table for 5 minutes, I was allowed to have a wander after the appetiser and first course. Simply a glance from my mum would signal me when I was free to leave. And I would inevitably miss the bollito and dessert.
But it wasn’t just then. Even when it was sunny outside I used to love spending my time in that room, uncomfortably crouched on the floor amongst dead spiders and cobwebs, surrounded by piles of papers and photos. My mind was visiting that past world when news traveled on fountain pens and ideas were spread via subscription magazines. And I loved fantasising about those times.
My great grandfather, Mentore, had a passion for studying, and was the recipient of these rare National Geographic and other periodicals from abroad, a sign of how cultured and cosmopolitan he was for those times. There were many opera librettos and countless novels of any kind. And then there were piles of old fashion magazines, where pictures of clothes were drawn and measurements given so a seamstress could update a lady’s wardrobe to the latest trends. I like imagining these belonged to my great aunt Maria, who although never blessed with good looks, always did everything to keep herself looking young and pretty, including, as legend goes, an unusual facial which involved resting steaks on her cheeks for a hour or so.
I still go into that room now and again, although the majority of the most interesting relics have been pinched by relatives while the less captivating material (ancient medical and legal volumes and accounting books) has now been thrown away. In the last few years, the room has been tidied, it’s not so dusty and unfortunately has lost much of its charm. But it can still gift you with some wonderful surprises. In one of my last visits I was flicking through a old novel when a bunch of photos fell on the floor. Slightly faded and bluish, they depicted a dark haired lady in a nightcap and nightdress, exposing herself provocatively. They came with captions (in Italian, French and English) like “Signs of Impatience” and “It’s him!”. I just stumbled on some early 20th century pornography, tucked in the same hiding place for around a century. I still don’t know who these racy photographs belonged to. My father liquidated my intrigued questions by saying they were probably hidden by an uncle who fought and survived the trenches of the First World War. If so, I wonder what tales these photos would tell if only they could talk and at how, like my relative, they came back intact from that horror.
I was so fascinated by my find that I brought the photos back to London, and now they hang framed in my bedroom, a reminder of a time when being saucy was a much more innocent affair. 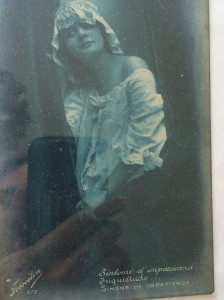