Not so scary Halloween pizza 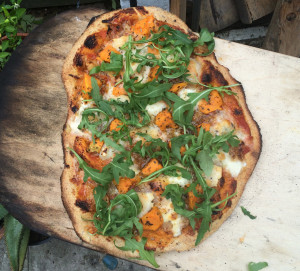 We built a pizza oven in our garden last winter. It was a long effort, with the thermal concrete pieces sent from Italy via a company in the UK and my DIY gifted boyfriend mixing more concrete to cover the ceramic wool he had to lay on top of the structure for insulation.

Before the dome pieces were shipped, he built a heavy concrete base too. Only when it was all set, on the garden floor, with a heavy metal railing at its core, we realised we had to put the “necessity is the mother of invention” motto into practice, and find a way to lift the base to the level of the breeze blocks walls on which it was meant to sit.

We had guests staying at our house, and the lengthy process of lifting the base little by little by wedging planks of wood underneath it, then finally sliding the base onto the breeze blocks with the aid of two scaffolding poles, became a collective effort, rewarded with a warm stew and the promise of a summer of pizza and parties in the garden.

And what a summer it was: propelled by creativity and health ethos I experimented  with different types of dough and an eclectic mix of toppings, some with good, some with very bad results, and I grew from being overwhelmed by the challenge of cooking something edible for all my neighbours’ hungry kids, to at least a relaxed pizzaiola, someone who still doesn’t spin dough while whistling ‘O Sole Mio’, but knows, at least, how to make a decent base, combine the right toppings and get everyone excited by giving them a piece of the action (ask your guests, especially the young ones, to make their own pizza, -and fun and laughter will be guaranteed).

So it was with growing excitement to the weather forecast that we decided to fire up the oven on Halloween and make the most of the heatwave that brought London temperature to an exceptional 24 degrees by cooking pizzas with pumpkin. Entertainment after the pizza came in the form of ‘Creep Show’ projected onto a screen rolled down between our conservatory and dining room. I also made a warming punch with our own elderberry syrup .(made last year from our pickings in Walthamstow marshes) cloves, a pinch of chilli and lots of ginger, with an optional splash of dark rum for those whom wanted the extra oomph.

The very elastic dough this time was 100% strong white  flour, with polenta flour thrown on the board, peel and oven base to make sure the base didn’t stick.
I bought a big quarter piece of  very orange fleshed pumpkin, the one with light brown, almost grey skin (looking at pics in the web, it may be a Jarrahdale or Ironbark) and roasted it in our kitchen oven using coconut oil, bay and rosemary from our garden, and salt and pepper.

I bought a big piece of Gorgonzola, half a Bosina (a lightly aged cheese made with a blend of cow and sheep milk) and two buffalo mozzarellas from the UK (Laverstoke Park, amazing taste!).
I lightly cooked the passata with olive oil, fresh basil, dried oregano and salt and had a bag of rocket, some walnuts and hazelnuts  to chuck on the pizzas after they came out of the oven.
The last pizza with all the gorgonzola we had left, just a few cubes of pumpkin and lots of crumbed walnuts and hazelnuts was probably the best.

Unfortunately by the time we had the pizza  ready, all the kids playing trick or treat had gone home…oh well…more for us!!!