On Jane Grigson and a polenta & trout dish 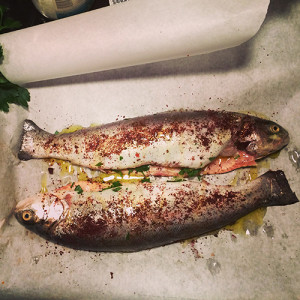 Last week I borrowed Jane Grigson’s English Food from my library. I was first deterred by the small typeface but now I got really into it, skimming through the recipes and reading the wonderful introductions to each chapter, dedicated to meat, fish, cheese and so on. What struck me is that the book was first published in 1974 and it already praised the few pioneering organic food producers who were protecting rare breeds and plant varieties from the ruthless industrialisation of the food system.

She saw the demarcation between the “foodless food” wrapped “in nice, clean plastic” and food grown and raised more sustainably. More poignantly, she also pointed out how detached urban dwellers had become from their food sources, citing how, already during the Second World War, children evacuated from big towns  refused to drink milk in their new rural homes, “because it came from dirty cows rather than from nice, clean tins”. The recipes are wonderfully old fashioned and extremely interesting to read for someone who isn’t born in the UK. Baked carp with soft roe stuffing, elvers in Gloucester style, salmi and salomene are just some of the dishes that caught my imagination the most.

In her introduction to fish, she laments how farmed fish is often of inferior quality and of trout she says: “the trout has turned into a mass market fish for an ignorant public: the only tolerable way of eating it is smoked”.
Good news then that our local Food Assembly fish supplier Sutton & Sons has some lovely Norfolk River Trout. Stocked but raised sustainably in river waters without medication, these fish are never in overcrowded conditions, looking muscular and less fatty than the ordinary farmed variety. I bought two the other night and had them with a dish I created out of necessity.

Since adopting a young rescue dog about 5 weeks ago, I haven’t been as organised with my meals and certain ingredients ended up waiting longer than expected to be cooked. Namely, a gigantic pumpkin I got from Food Assembly about 4 weeks ago left languishing in my cupboard behind the potatoes. 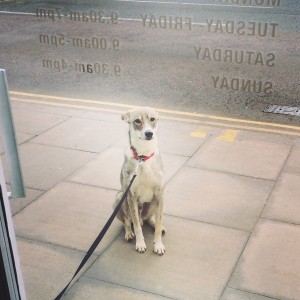 Introducing Jerry ‘the jackal’, our young rescue, waiting outside our local butcher

So I raided my pantry, got some quick cook polenta out, added a little bit of paprika et voila’: a tasty accompaniment to my two fat trouts was ready to be served. 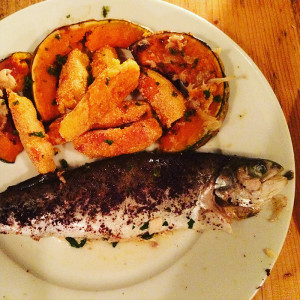 Preheat your oven to 200C and warm up a roasting tray.

Season the pumpkin wedges with salt, pepper and olive oil. Arrange the pumpkin on the hot oven tray and place the garlic in the middle. Roast for 45 minutes until the pumpkin is nicely coloured and tender.

Take half of the pumpkin out, scoop the flesh from the skin and place in a medium sized saucepan. Add the polenta, a splash of water, the salt and the paprika. Whisk on a low heat until all lumps have dissolved, then switch to a spatula and stir until  you reached a thick consistency and your arm hurts slightly.

Lay the polenta out on a baking tray lined with baking paper to cool down. At this stage, your polenta should be fairly solid. If it isn’t, place it for a few minutes in the oven to dry out further. Once cool, cut in 10×2 cm strips, the size of handcut chips.

While you’re waiting for the polenta to cool, heat a knob of butter in a small frying pan and fry the sage leaves until crispy. Remove and set aside. Roughly clean the pan with kitchen roll.

Once you have your polenta ‘chips’ cut, heat the oil in the same frying pan. Lift the polenta strips off the baking tray, lightly dust them with cornmeal or polenta flour and  fry them in the oil until crispy.

Pile the polenta chips on a serving dish and top with the remaining roast pumpkin. Squeeze the roast garlic pulp over the pumpkin and discard its ‘shell’. Scatter the crispy sage on top and serve with the trout. 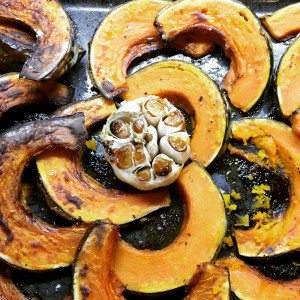 a dusting of sumac or sweet paprika powder

a glug of olive oil

Prepare your trout by placing them on a baking tray with a large sheet of baking paper underneath. There should be enough paper to wrap them in a parcel before cooking.

Fill their belly with garlic, salt, pepper and parsley. Dust the outside with sweet paprika and add olive oil all around them before closing the parcel and placing them in the oven, under the pumpkin, and cooking them for 20 minutes.