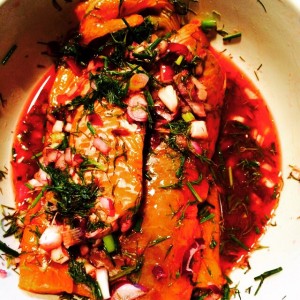 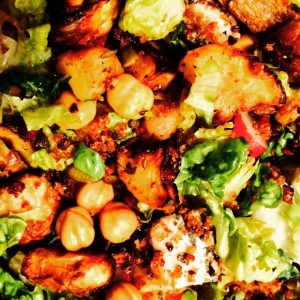 I made this dinner after reading up a recipe for a yummy salad on the Saveur newsletter, attracted by the fact it used lots of hazelnuts. My father grows them everywhere he cannot grow grapes: in Piedmont we have a particular type of hazelnut, the round shaped Tonda Gentile, which is highly prized for its flavour. It was with these hazelnuts that the first Nutella was created, before Ferrero became uber famous and started buying up about a third of the world production of this nut to make its spread.

While reading the Saveur recipe, I also realised that apart from wheat beer and blue cheese, I had everything I needed to make it, so I bought some gorgonzola and a bottle of Gentleman’s Wit by Camden Brewery and set out to find something that could be appropriate to pair with it. 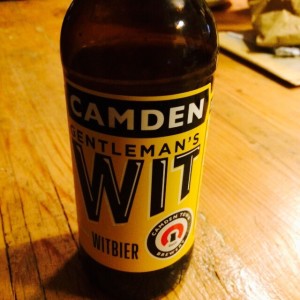 In my freezer at the moment is a lot of smoked fish we bought about two months ago. It needs using and while wondering how to cook it, I noticed I had red onion, dill and lemons. I decided to make a marinade with them then pan fry the smoked fish, but after squeezing the lemon I realized I did not have enough juice. Looking around I saw my full bowl of blood oranges and set out to make an experiment: how about marinating the smoked bass in blood orange juice, then using the juice to lightly caramelise the fish while pan frying it? Total experiment. I liked the idea. And set off to cook.

The result was amazing. The fish edges were lightly caramelised and after a few hours of marinading, the blood orange gave the fish a beautiful red colour and enriched the aroma of its smoked flesh. I looked at the fish while it was marinading and I thought immediately of beetroot, in my mind another complementary flavour of that Eastern European cuisine which informed much of this invented recipe. Blood orange instead of beetroot, what a happy marriage of Italian and Russian flavours!

For the salad, I took the Saveur recipe and and substituted canola oil for coconut oil in cooking and olive oil in the dressing (both healthier options) Also, since I had no shallots but plenty of small red onions and large spring onions, I used the red in the cooking and the spring onion in the salad dressing.

Combine all the ingredients for the fish into a bowl and let it marinate for at least 2 hours.

Heat oven to 250°. Toss parsnips, 2 tbsp. coconut oil, chopped thyme, sliced onion, salt, and pepper on a baking sheet; spread into an even layer. Bake until parsnips are golden and tender, about 45 minutes; transfer mixture to a bowl.
Add bread crumbs, butter and pepper to baking sheet and toss to combine; bake until crisp, about 15 minutes, and transfer to another bowl.
Add the hazelnuts, pumpkin seeds paprika, salt, and pepper to baking sheet and toss with 1/2 tbsp olive oil to combine; bake until toasted, about 15 minutes, and let cool.
2. Whisk minced spring onion, the vinegar, beer, honey, salt, and pepper in a large bowl. While whisking, slowly drizzle in remaining olive oil until dressing is emulsified; set one-third of dressing aside.

Add radishes, frisée, lettuce, salt, and pepper to a bowl and toss with dressing. Sprinkle with reserved parsnip mixture, bread crumbs, and hazelnuts and crumble blue cheese over the top. Mix everything in the bowl then serve on plates with remaining dressing on the side.

Heat a medium sized pan on full heat. Add some of the fish marinade and let it bubble before adding the fish fillets and cooking them for about 5 minutes on each side, until done.

Remove fillets and serve on plate.