Reflections in water. On nature and the food chain 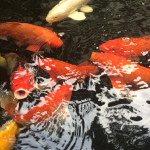 Reflections in water. On nature and the food chain

During my days in Koh Tao it was the time I spent snorkeling that made me marvel the most. Schools of several fish of different species, size and colours, moved together in a feeding frenzy, like a swarm of locusts, from one corner of coral to another. It’s fascinating to observe their behaviours and evolutionary tricks: the ones that mimic rocks and seem to just stand on them, the ones that are one with the sand, impossible to spot if it weren’t for the dark dot of their eyes. There are some of such bright colours you can see from a distance, iridescent with turquoises and pinks, or all yellow, white and black stripes.

But it’s a tiny black and blue fish that caught my imagination the most. It follows certain kinds of bigger fish and when they see him, they start swimming upright and let him clean their scales. This small example of interdependence between species really opened my eyes to what nature actually is, to how necessary all pieces in the puzzle are to each other.

The earthworm and fungi feeding and giving organic matter to the soil, the plant feeding on such soil, animals feeding on plants, we feeding on these animals.

At the root of life is the simple act of eating. Food is what links us humans all the way down to the quality of our soil and oceans.

Because we are at the top of many ecosystems’s food chains, we decide, through agriculture and the rearing of animals, what species are to thrive more than others. But very much like the tiny black and blue fish, what if our relationship with the plants and animals we raise has been the product not just of our will, but of the positive evolutionary traits developed by them?

By giving us high yields of tasty apples, the Cox variety has succeeded over others to become one of the most widely grown. The selection of certain breeds of cows for their quality of their meat or milk, has been beneficial to both us and the Holstein breed itself, of which now there are much higher numbers.

All species compete with each other for space on this Earth and humans have the power to decide the success of a few. Those species that managed to conquer our tastebuds, are conquering the Earth too. Just think of wheat, soy and corn, now occupying land previously covered with forest. Because of the crushing victory of these three species over all others, we do not rotate crops anymore, we need to use more and more pesticides and our diets are less varied than they used to be. It is these three crops that form the bulk of all carbohydrate and protein in our processed foods, while fossil fuels are taking the place of the Sun as the main source of energy driving our food chain. Most of the ingredients in a Mars bar are derived from wheat, soy and corn, cleverly processed and reassembled by a food industry powered on fossil fuels.

In my work as a homeopath I am seeing more and more sick people. We are sicker today than we were 50 years ago and our soils and oceans are getting sicker too. In Koh Phanghan after a storm I was shocked to see the amount of rubbish washed over the beach in the morning. My intuition tells me our health depends of that of the environment we get our food from.

I think of what drove my late godfather (a food and wine journalist and public figure) to relentlessly attack the food industry in defence of sustainable farming. We are polluting the soils and waters that feed us, succeeding in producing huge amounts of food, but this food is making us sicker, not healthier. By letting us be conquered by three main crops,  we are denying our relationship with the land and our dependence on the dazzling variety of vegetables with their vital nutrients. Think about this next time you buy a Mars bar…