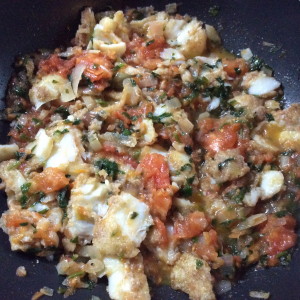 On Monday night I cooked a mini feast: we had many evenings planned this week so that was my only chance to get loose in the kitchen. Also, on Saturday we went to Borough Market and while browsing in the fabulous Brindisa deli, I could not resist the temptation to buy a piece of salt fish.

Salt dried cod, or baccalà, is very popular in my native Piedmont: while in Venice it is usually mantecato, that is, cooked for a long time with milk until a mousse-like paste is obtained, in my area we usually coat it in flour and fry it, then mix it with sauce and serve it with polenta. While perusing the shelves in Brindisa and lusting after the charcuterie, cheeses and autumnal treats, my eyes fell on the cod and I instantly rememberend my grandma making it: she often bought the fish dry then soaked it in water for a long time. My mum, who was busy working, opted instead for the ready soaked, more expensive variety.

Apart from serving it with polenta, another less known accompaniment, which is typical of the Alessandria province and owes a lot to our proximity to the Liguria region, is farinata, a sort of chickpea flour pancake which in Piedmont also sees the addition of pumpkin and leek. 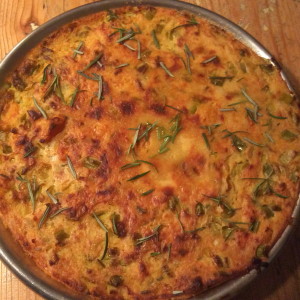 Determined to post at least one unusual pumpkin recipe a week until Halloween, I jumped at this opportunity. After all, this summer some friends from Genoa gifted us with a copper pan specifically intended for farinata and a large bag of chickpea flour. At that time we tried it in the pizza oven, and the results, if a bit burnt in places, were really tasty. This time I would just cook it in the kitchen oven, and pair it with the baccalà dish. 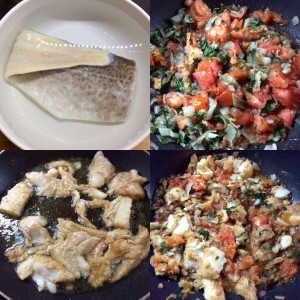 Soak the fish in water for at least 12 hours, changing the water as frequently as you can.

Heat the olive oil in a large pan and fry the shallots slowly on low heat, adding a pinch of salt to help them sweat. When they’re soft, add the parsley, stir and let it sweat in with the onion for a couple of minutes.

Add the tomatoes, press them into the sauce to break them slightly and chuck in a bit of salt to help draw out their moisture. Crush the garlic in, stir, and cook covered for about 5 minutes.

Remove the cod from the water, wash and pull the skin out. You’ll find the fish will be quite brittle, but try to cut even pieces out of it which you will then coat in flour. Heat the rapeseed oil in a large pan, fry the cod in batches for about 2-3 minutes on each size depending on thickness, and place on kitchen paper to dry out the oil.

Add the fish to the sauce, adjust with salt and pepper, stir delicately until the cod is blended evenly with the sauce, then serve. 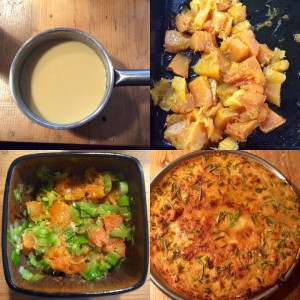 salt and pepper to taste

Fill a medium saucepan with water and add the chickpea flour by whisking it in little by little, carefully breaking any lumps. If you need, press the lumps against the edge of the bowl with a spoon, so you can break them faster. The resulting batter should be slightly thick, leaving a layer on the surface of the spoon after you stir it. Cover and leave to rest for a minimum of 5 hours, stirring now and again.

Remove the seeds off the pumpkin, peel it and chop it in 1cm cubes. Roast it in a oven tray slightly covered in 1 tbsp olive oil for about 15 minutes until soft. Remove from the oven and place in a bowl.

Heat 2 tbsp of the olive oil in a medium pan and sweat the leeks with a pinch of salt on low heat until soft. When ready, stir it in with the pumpkin and half the rosemary. Add salt salt and pepper to taste.

About 20 minutes before you start preparing your salt cod, raise the temperature in your oven to 250 C. Fold the pumpkin and leek mix in with the chickpea batter and stir. Splash the remaining 4 tbsp olive oil in a shallow 30cm wide (12 inch) pizza tray and tip in the batter. Bake for about 30 minutes until golden, then remove from the oven and serve.

This batter mix will make about 4 portions, so you can save some for the next day at lunch. I had some extra roasted pumpkin and I made a quick salad with rocket and balsamic vinegar. The farinata will be nice even at room temperature. 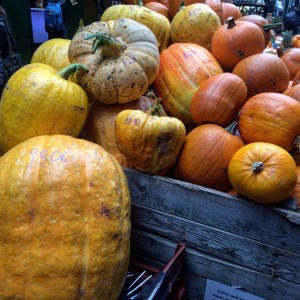