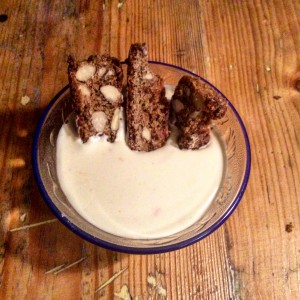 I had this in mind for a while, since I listened to the Kitchen Cabinet show with Jay Rayner and Rachel McCormack discussing Caledonian cream. The way orange and whisky complement each other is brilliant and the whole process of making this recipe is so easy I can’t see why I never made it before.

But how could I give this frankly addictive Scottish dessert an Italian twist? I thought of substituting whisky with amaretto and that this boozy cream was just calling to be matched with another Italian classic, cantuccini senesi, traditionally dunked in dessert wine at the end of a meal.

I kept the marmalade of the original Caledonian cream recipe and next time I might try adding some crushed toasted hazelnuts.

I made the cantuccini following the traditional recipe, but used fine wholemeal flour instead of white. In the Caledonian cream, I substituted the cream cheese some cooks recommend to blend with cream, with Italian mascarpone. A probably less processed, although a bit heftier choice.

Here is the recipe: 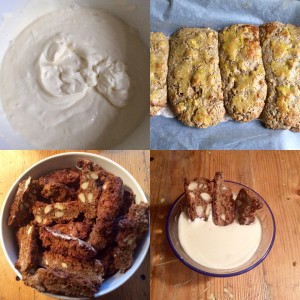 juice of half an orange

the zest of an orange (organic, or was well by steeping it in water its 1/2 tsp bicarbonate for a few minutes)

4 tbsp chunky orange marmalade (the kind with peel in)

the peel of half an orange (again, organic or previously soaked)

3 small eggs or 2 large ones, one yolk 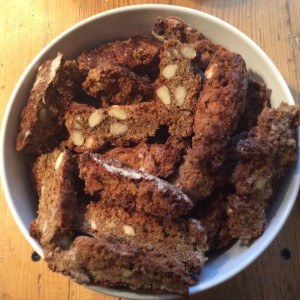 Prepare the cream by putting all the ingredients in a bowl, except for half the marmalade, and blend. Stir in the rest of the marmalade and refrigerate for at least one hour.

Mix together the flour, sugar, vanilla extract, bicarbonate, aniseed and orange peel. Cut three quarters of the almonds in half, leave the rest whole and add to the mix. Add the honey and one by one the eggs. Work the dough thoroughly, adding more flour if necessary.

Separate a small quantity of dough and shape it in 3cm wide rolls. Place over baking paper in a oven tray, flatten them out slightly and brush them with the egg yolk. Cook in the oven for 15 minutes until golden brown. The outside will be crisp, while the inside will still be soft and gooey.

Remove from the oven, cut diagonally into 1cm strips, and cook for a further 5-10 minutes until crunchy inside.

Serve the cream into small dessert cups and place 3 or 4 cantuccini on top. So here you have it, Caledonian cream Italian style with Amaretto and biscotti.

Health score: 2 (but smile, it’s a once in a while treat so enjoy it!)