…Back home to a historical restaurant and a few genuine pleasures…. 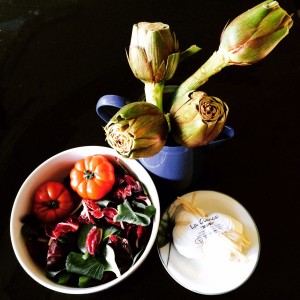 I’ve been through some kind of personal turmoil since coming back from Thailand and needed to leave London to see my family and catch up with old friends. I missed the feeling of certainty of seeing long known faces, the confidence of walking through familiar streets and the comfort of eating the foods I grew up with. I wanted to recharge and perhaps escape. So I went back to Turin and spent three days snowboarding in nearby Sestriere, a ski resort I know since childhood, where one of my best friends still lives and works. 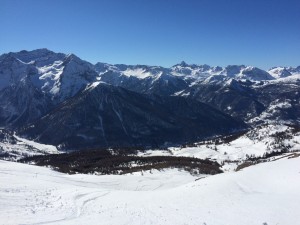 My family welcomed me by taking me out to lunch in Turin’s oldest restaurant, Ristorante Del Cambio, a very special place. Founded in 1757 and located on piazza Carignano, where Italy’s first Parliament still stands (Turin, not Rome, was Italy’s first capital city after the country’s unification in 1861) Del Cambio has recently undergone an ambitious renovation said to have costed 6 million euros. Its charming features have been preserved and enhanced by works of art by the likes of Michelangelo Pistoletto, Pablo Bronstein and Arturo Herrera; in addition to the grand chandelier-lit restaurant downstairs, now diners can also enjoy drinks until late at the upstairs contemporary bar.

At the ground floor restaurant, where Italy’s first prime minister Camillo Benso, Count of Cavour, used to lunch and dine every day, all the rooms have walls covered with ancient mirrors, used by the old intelligentsia of the time to spy on each other’s glances and whispers, fuelling mundane gossips and political intrigue. Cavour himself chose a table which allowed him to keep an eye on the Parliament’s balconies, so that his employees could inform him of the outcome of important parliamentary discussions by the wave of a handkerchief, while he carried on eating the chef’s delicacies.

The lunch menu offered outstanding quality at an accessible price. I had a soft egg poached in a blue cheese fondue with crostini as a starter, then tagliatelle with veal ragu as a main and hazelnut cake topped with zabaione (a cream of egg yolk, sugar and sweet wine) and chocolate ice cream at the side. It was an amazing experience, the staff attentive but not overbearing, the setting unique. 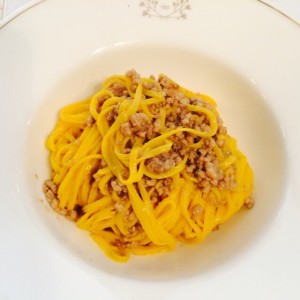 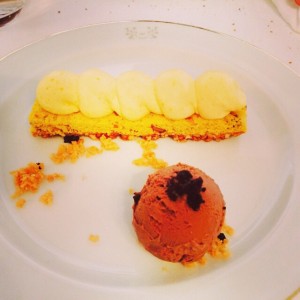 As part of the renovation, the restaurant acquired the old chemist shop that stood next door and turned it into a delicatessen and patisserie. You can have coffee at a small table overlooking the restaurant’s kitchen, surrounded by the original wood furniture with drawers bearing names of medicinal plants. On shelves are jars of dried fruit, packaged to look like a cross between something you would buy in a deli and something coming from an old style pharmacy. 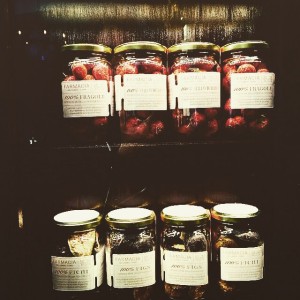 And this lunch was just the start: during this break I always ate at home, at friends’ places or in chalets on the pistes.
Standing out has been the delicious simplicity of the ingredients. I savored crunchy, meaty artichokes in olive oil, together with sharp, firm tomatoes bursting with taste, and a tiny, bitter baby salad with thick, sturdy leaves. The quality of these simple vegetables tells all of what I miss about not living in Italy not . And how to forget our local delicatessen, Im Bedamje, supplying us with an incredible ‘paglierina’ cheese stuffed with a mascarpone-like cream, and a gourmet ‘stracchino’ I had to bring back to London?

At my friends’ place for dinner I was treated once to homemade sundried tomatoes, artichokes and stuffed peppers, another time to melt in the mouth beef ribs in barbecue sauce. And finally after a day snowboarding we stopped at a chalet, seeking comfort while the clouds were gathering menacingly in the sky. And boy we found it, in the form of a tasty organic stone ground polenta with juicy goulash and the best tarte tatin I had in years, a thick layer of caramelised apple over a soft pastry base.

This trip really nourished both my body and my soul, and now I am ready to get going, connected to my roots and full of optimism for the future, gliding like I was on the snow. 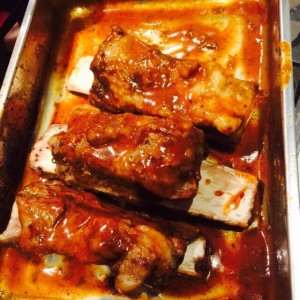