Pasta with Chloe the crab, artichoke and saffron 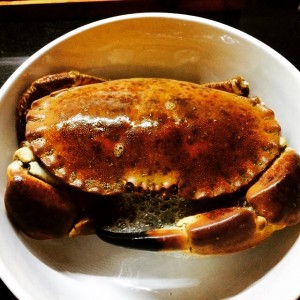 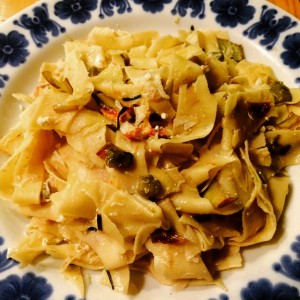 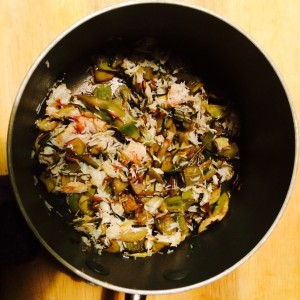 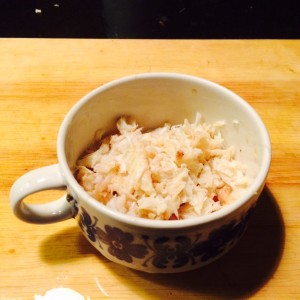 This dish came out of a hitch. I set out to make agnolotti with some lovely artichokes I brought back from Italy and a small crab I got, live, from the local Food Assembly, an initiative that brings together local producers and sells their fare at a local pub every week. I named the little crab Chloe because of its small perfectly formed claws and started plotting its honourable demise.
The plan was to make the filling with the crab meat, some of the artichoke stalks, a touch of ricotta cheese, chives and saffron, and the sauce by pan frying the rest of the artichokes (heads and remaining stalks). I mixed 300g flour with 3 eggs and two yolks, added a bit of warm water, made my dough, rolled it into thin sheets… then my phone rang.

It was my friend and she needed some help. It wasn’t gonna take long, she assured me, I only had to help her move a heavy piece of furniture at her house, 5 minutes walk from mine. No it wasn’t urgent but yes if I could come NOW it would be lovely. Otherwise after dinner. Mmm….  I was making myself lovely agnolotti so I could relax afterwards, I was definitely NOT gonna shift heavy objects after my food…. “Ok then, I’ll come now”…

I glanced at my sheets of dough drying on the rack and I promised them I would be back in time…already knowing deep in my heart that that wasn’t going to be the case.
By the time I was back, half the sheets were already hard and would have never stuck together. Desperate, I tried splashing them with water to see if it changed the consistency but no chance, I had to improvise another solution for my dinner.

So I simply turned my sheets into maltagliati, which literally means ‘badly cut out’, wide strips of pasta, and saved about half of them for later. As sauce I used what should have been the agnolotti filling and the artichoke topping, saving me some time compared to making agnolotti and enjoying my dinner relatively on time, despite my furniture moving trip.

It was still very delicious, and here is how I did it:

Weigh the flour, put it on a flat surface and form a volcano shape in its centre. Break the eggs and yolk in the hole and slowly combine eggs and flour together. Work the mix into a dough, adding warm water if necessary. When the dough looks uniform, start flattening it using a rolling pin on a floured surface, then pass through a machine on the largest setting for 6-8 times, folding in half each time.
After this first stage you can start thinning the dough, reducing the width of the rollers  each time. My machine, a basic Imperia pasta maker, has six width settings and I always tend to roll the dough down to the thinnest one.

Leave the dough sheets to dry on a rack (a clothes dryer will do if you don’t have one) and start on the sauce.
To be kinder on the crab, I’m used to freeze it before chucking it in boiling, salted water. This way he will be half hibernated and apparently feel less pain, although I am not sure…

Boil the crab for 15 mins per kilo and let it cool down. Flip it over with the claws pointing away from you and with your thumbs press on a little hole by its tail. This way you’ll be able to open its top shell: remove the grey finger shaped gills (also called dead man’s fingers) as they are tough and indigestible.
Scoop out the rest of the flesh and put aside.

Peel the outer fibrous edges of the artichoke stalks and chop the softer core in half a centimetre pieces. Quarter the artichoke heads and remove the outer, harder layers and the spiky core. Chop the quarters lengthways.
In a pan melt a knob of butter and lightly fry the the artichoke stalks. Add the chopped heads, salt to taste, cover and cook on low to medium heat for about 10 minutes until soft. Add the crab meat, ricotta, chives, saffron and another knob of butter and mix for 2 to 5 of minutes, until everything seems to have bound well together.

Cook your fresh pasta until soft (mine took only 3 minutes) drain,put back into the pan and stir the sauce in, mixing it well so it’s all well covered. Serve and enjoy!